Information on Progresses Past

Learn about the Elizabethan Era 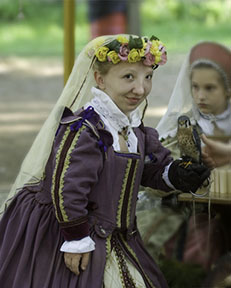 With her Court boiling over with ambition, status-mongering and plots a-plenty, to whom could the Virgin Queen turn for simple honest truth?  The answer might surprise you:  Her Majesty's Fools.  Thomas Fuller's HISTORY OF THE WORTHIES OF ENGLAND notes that Elizabeth's famous fool Dick Tarlton "told the Queen more of her faults than most of her Chaplains." From her father, good King Henry VIII, who kept the legendary Fool Will Somer, Elizabeth learned the wisdom of fool-keeping, relying on her Fools for blunt opinions, entertainments, and reminders of the real world beyond Court glamour.  Elizabeth kept many Fools, and her reign is justly famous for the Fools of her Court. 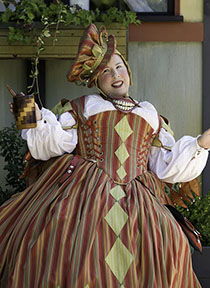 Some of Elizabeth's Fools were "naturals," having a mental or physical disability.  One of Elizabeth's most famous Fools, Thomasina (also known as "Thomasina de Paris" or "Mrs. Thomasen"), was a dwarf;  Jane the Fool (also called "Jeannne le Fol" or "Jane Hir Fole") may have been developmentally disabled or mentally slow due to illness; and Monarcho (alternately "Monarko"), mentioned by Shakespeare, may have been delusional, thinking himself King of the World.  Society considered the differently-abled to be touched by God for a higher, unknowable purpose.  The Queen cherished her naturals, and she kept them for amusement and companionship, and also for what inadvertent wisdom could come of their outbursts. 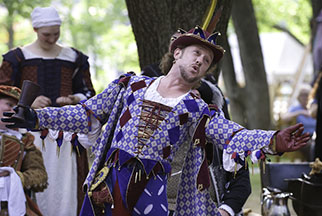 Other Fools of Elizabeth's Court were "artificials," skilled and trained entertainers.  One was Tarlton, of whom Fuller writes, "Our Tarlton was the master of his Faculty.  When Queen Elizabeth was serious...and out of good humour, he could un-dumpish her at his pleasure...and cured her melancholy better than all of her Physicians."  John Pace, William Shenton, Lucretia the Tumbler (onetime partner of and minder to Jane the Fool), Robert Grene, Chester and Clod were the most famous of Elizabeth's artificial fools, entertaining her with songs, stories, tumbling, juggling and impressions.  As fools had license to tell truth, the artificials would often mock the excesses and ambitions of Elizabeth's most devious courtiers, earning the nobles' ire and the Queen's appreciation.

*The viewpoints presented here are those of the 16th century.